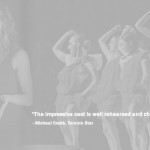 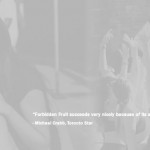 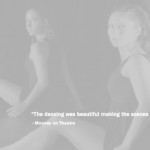 Confessions of a Choreographer #9 – Anti-Bullying Week 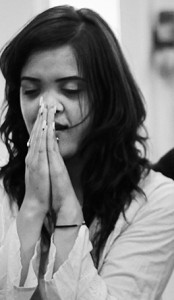 I sat alone in the school courtyard and watched silently as the other kids played. I was about 9 and had just moved back to England. Each time I moved the transition into settling in was different but the bullying was always the same.

A bully – someone who taunts another in an effort to get control and feel significant.

I would watch as the school girls got punched by the school boys. It became like a game. The girls would run and hide and the boys would chase. I managed to get away during recess. Unfortunately, my walk home was a different story. All I heard were loud bolts of laughter as I was tripped by a group of pre-teens and then taken to the ground. Feeling embarrassed and bruised, I picked myself up only after the coast was clear and I could feel safe again.

Being bruised was just the tip of the ice burg. It was the living in fear that was the hard part. A fear that silenced me into my own world. Having had a hard time expressing myself or being vulnerable as a child, I had to find ways to protect myself.  As such, I gravitated to the performing arts to help express myself in the safest way possible …as another character! I would channel an imaginary character to help fight my battles, cry out loud, or protect myself from any hurt/pain. Being myself had felt too painful so developing new characters gave me a little strength to move forward.

I’ve often said that the creative arts has not only been my greatest passion, but it’s also routinely saved my life. It gave me something to live for.

Thus, being on stage or in front of a camera was never about the ‘fame’ or ‘being famous’. It was always about expression. An outlet. A reason to live. It later on provided confidence and the ability to see things from different perspectives.

However, I’ve been lucky to tap into my own creativity to help me along my own journey in facing issues of bullying. There are still many people out there who are caught in the cross fire and are feeling helpless and alone.

This week is about awareness on the issues of bullying. Limitless supports the Anti-bullying campaign with hopes that with open and honest discussions, we can begin to find solutions to help create healthier living / relationships. We have brought awareness to the issue by producing programming that talks about the cycle of bullying/abuse. Whether you are a youth reading this or an adult, bullying can happen at any age. It is important to be aware and know that there is a lot of support out there.

All week this week, the Limitless FB page – http://www.facebook.com/#!/pages/Limitless-Productions/101524863233550 – will post stories / articles / material and quotes in support of the campaign to end bullying. We also encourage any online dialogue on the issue.

To receive any further info on this issue or to find out about our programming, please contact us at limitlessdance@gmail.com